Christmas has arrived early for Marvel fans! After the sitcom-esque ‘WandaVision,’ comedy actioner ‘The Falcon and The Winter Soldier‘ and ‘Loki,’ which cracked the multiverse wide open, ‘Hawkeye’ is the next MCU show to join the Phase 4 line-up, just in time for the holidays. But unlike its predecessors, this show sets its gaze on a different target altogether.

Starring Jeremy Renner, reprising his role as Clint Barton and Hailee Steinfeld, who is making her superhero debut as Kate Bishop, the Disney Plus series is directed by Rhys Thomas and written by Jonathan Ingla. In its opening episodes, we are introduced to what looks like a more grounded superhero story amidst the multiverse madness. And that pretty much captures the essence of the most underrated Avenger. So without further delay, let’s jump into the necessary business of decoding what went down in the show’s first two episodes.

Spoilers Ahead for ‘Hawkeye’ episode 1-2.

Comic book readers first met Kate Bishop back in ‘Young Avengers’ (2005), so the fan-favorite character’s big live-action debut is long overdue. Drawing from Matt Fraction and David Aja Omnibus’ ‘Hawkeye’ comic run (recommended reading for fans of the archer), the show manages to flesh out a story that ropes in both Renner’s Clint and Steinfeld’s charming Kate. Opening with the Battle of New York 2012, episode 1 gives us some backstory for young Kate, whose parents are arguing when the alien invasion hits. This is where Kate watches Hawkeye shoot an arrow and save the city from significant damage. Inspiration strikes, and she decides to take up archery to protect herself and her socialite mother, Eleanor (played by Vera Farminga). Cut to present-day New York, where a 22-year-old Bishop is navigating college, a job at her mother’s security firm, and getting into all kinds of trouble.

Meanwhile, a weary Clint Barton is getting into the Christmas spirit at a broadway show titled ‘Rogers: The Musical’ in New York with his kids. While he’s a national hero who gets greeted by fans in the streets, he is also confronted with painful memories of his time with the Avengers and Natasha Romanoff’s death. Yup, like most Phase 4 shows, this one will most likely deal with the grief that inevitably follows all that superhero action from the previous movies.

Elsewhere, Kate follows her suspicions about her mother’s fiance Jack Duquesne (Tony Dalton), at a charity dinner and stumbles upon a secret auction with a familiar Ronin suit and retractable sword on display (the same suit Barton wears post-snap in Endgame). This is where the Tracksuit Mafia launch an attack searching for a stolen watch that belonged to Stark. Of course, Kate takes the first chance to put on the Ronin suit as a disguise and flee the scene with her four-legged companion, Lucky the Pizza Dog. Her escape makes headlines for Clint to see. It’s safe to say his Christmas plans switch from making a gingerbread house with his family to tracking down an unwitting vigilante who, to his annoyance, is just a child. Considering that the suit has a target sign on its back and will continue to draw attention from criminals, he agrees to help Kate. While the mission is a tiresome detour for Hawkeye, it’s a fangirl moment for Kate, who has spent her life idolizing the Avenger.

Once the first episode lays the groundwork for where the lead characters are, episode 2 aims to build on their accidental mentor-mentee relationship. After the Tracksuit Mafia blow up Kate’s apartment, Clint offers his temporary services to retrieve the Ronin suit while they’re on the run, trying to throw off the thugs. In the sequences that follow, Steinfeld shines, serving one look after another. But the best parts of the show are where she shares screen space with Renner, playing out the banter between the two allies. They’re funny without even trying, as Bishop’s excitement is met with Barton’s perpetually worn-out demeanor. It isn’t long before the partners end up getting captured by the Tracksuits after Kate’s botched attempt at rescuing Clint. The episode ends with the villains showing off their prize to their boss, who is none other than Echo, another new entrant in the MCU. Hawkeye and future Hawkeye are presently at her mercy.

But who is Echo, and what does her entry mean to the MCU?

‘Hawkeye’ might be the first show to introduce Echo, but Marvel fans know her as Maya Lopez, another fan-favorite character who has been featured in multiple comic runs as the adopted daughter of Kingpin. At the very end of episode 2, we see Maya feeling speakers with her fingers as ‘Christmas Island’ by Depeche Mode plays, giving us a clue that her hearing is impaired. Echo, as the superhero name suggests, is gifted with photographic reflexes and can mimic the moves of her opponent in a fight (think Taskmaster). Echo’s casting is also a huge win for representation. Since Lopez is of Native American descent, Alaqua Cox, the actress playing her, is a deaf Native American. This is yet another example of inclusive casting after the MCU added Makkari, played by a deaf actress in Chloé Zhao’s ‘Eternals.’ It is also noteworthy that Clint is seen wearing a hearing aid in the show.

The character is undoubtedly an exciting addition to ‘Hawkeye.’ For starters, she’s a side character who goes up against Daredevil. In the comics, she was initially introduced as Ronin’s superhero alter ego although, the MCU has Clint taking on Ronin with Kate next in line to dawn the suit. But trivia aside, the bigger question by the end of the episode is whether or not Echo is a villain. To that, Marvel might have already provided the answer. On Disney+ Day, the studio announced ‘Echo,’ a spin-off series with Cox reprising her freshly launched role. The fact that Marvel was quick to give the character her own series suggests she has a larger part to play in the MCU than fans previously believed. What’s next for Hawkeye? Only time will tell. In the meantime, let the theorizing begin.

‘Hawkeye’ is a 2021 Action Drama series based on the Marvel Comic Books Characters. It is streaming on Disney+Hotstar. 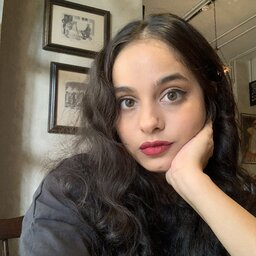 Tanzim Pardiwalla
Tanzim is a full-time cinephile with a passion for dissecting moments in film & TV. When not writing about the wild expanse of pop culture, she is either cosplaying or putting her literature degree to good use by devouring books over a cold brew.